A Guide to Shinto Weddings 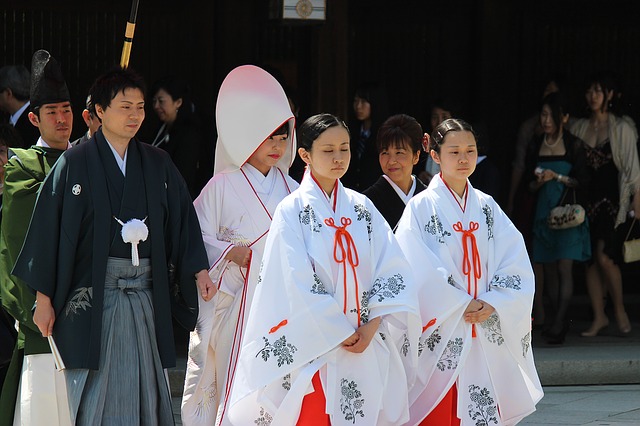 In Japan, there are two distinct wedding traditions – the western tradition familiar to us in the UK, and the older native Shinto tradition. While fewer people are having Shinto weddings than in the past, they are still a major part of Japanese cultural practice.

Shinto weddings usually take place in a Shinto shrine. A Shinto priest oversees and carries out the ceremony – along with the Miko or shrine maiden. This is much like the role of a church and vicar in a Christian ceremony.

However, that is as far as the comparisons can go. A major part of the Shinto ceremony is the ritual of the Three-Three-Nine-Times (san-san-ku-do). This is a sake (rice-wine) ceremony, where the couple take three sips from three cups poured three times. The origin of this ritual is unclear – much like Shinto weddings overall.

The concept of a wedding being a Shinto practice is a new one. The first recorded weddings in Japan date from the 1880s – while Shinto itself is at least 1300 years old, if not much older. It is only in the early years of the 20th century that marriage in Japan took on a character similar to that of the west.

Shinto weddings have a great deal of pageantry and traditional clothing. Both bride and groom usually wear a Kimono, usually in the red and white colours that symbolise purity in Shinto. Brides also wear a large paper hat, known as a Horn-Hider (tsuno-kakushi). This symbolises hiding the ‘horns’ of jealousy.

Shinto weddings represent and reflect the deeply held traditions of Japan. While they are a comparatively recent development, they are still indicative of the regard traditional practices are held in.